The current system of growing and distributing our food is broken. Developed countries waste over 40% of their food, enough to address famine and feed people in need three times over. In 2015, the United Nations put forth their Sustainable Development Goals for 2030. Goal #12 calls to "Ensure sustainable consumption and production patterns" and includes amongst its targets to "halve per capita global food waste at the retail and consumer level, and reduce food losses along production and supply chains by 2030." Taking a deeper look at the global food system, reaching this goal will be impossible if we continue business as usual. The call to action is for humanity to go back to its roots—to the times when “living off the land” did not result in us destroying it.

The first signs of agriculture in our civilization date back to the Holocene era around 9,500 BC. The invention of agriculture brought a stable food source and contributed to the successful population growth of the human species. Some estimates state our population grew by a factor of 1000 since the advent of farming.

According to the United Nations, we are projected to have 9.7 billion people sharing the planet by 2050. Many question whether our planet has the capacity to produce enough food to feed this future population. Echoing research and claims made by thought leader Tristram Stuart in his groundbreaking book Waste: Uncovering the Global Food Scandal (c. 2009), I argue that solving the systemic issues behind food waste would in turn provide more than enough nutritious and abundant food for the world to thrive.

The Problem with Food Waste

When food is thrown away, both people and the planet suffer. People in the developed world treat it and trade food as a commodity. Stuart writes, “Food is not just a commodity but a vital interface between people and the earth… and our fate depends on how we treat [the earth]” (p.286).

The main environmental impacts of food waste are around the pressure it puts on our natural resources, and the increase in greenhouse gas emissions. Food production uses land, water, labor, and other resources, so when it is discarded or unharvested, those efforts and depleted resources were also a waste and need to be recreated elsewhere.

Pressured by population growth and demand in richer nations, more ancient forests are cut down in developing countries and converted into farmland or pasture, further destabilizing local communities and the regional climate. All for naught because the destruction of the world’s forests to create more farmland is not necessary to meet the global needs for food. Waste reduction and efficient (re)distribution of our resources are the necessary social imperatives.

Secondly, when food products are taken to landfill, their decomposition occurs in an anaerobic environment, and the byproduct is methane gas that when released is over 20 times more potent than CO2 emissions.

At each point along the supply chain, loss occurs. Crops loss at the farm level, or produce left unharvested due to cosmetic imperfections. Human-grade food is rerouted to feed livestock. The layers of transport, middlemen, resellers, and distribution centers work to get products to markets and grocers. Finally, in richer countries, households yield the final blow to this system full of inefficiencies.

According to Stuart, solving the food waste crisis involves a coordinated effort on the parts of consumers, government, supermarkets, manufacturers, restaurants, food service, and farmers. From protecting farmers from the whims of supermarket demand, to adequate forecasting at convenience stores, every action is important.

In the United States, one major misconception is that businesses or grocery stores cannot donate food because they could be sued should the recipients claim to fall ill. Actually, the United States passed the 1996 Federal Emerson Act and Good Samaritan Laws which protect businesses across all 50 states from any liability when donating to nonprofit organizations.

Lastly, there’s the business case. Essentially waste is equivalent to lost revenue or value. Most restaurants and food purveyors understand this concept. Integrating incentives for reducing waste and applying best practices through all steps of the supply chain would have a huge impact on the bottom line, and the integrated bottom line that also considers people and the planet.

Learn more about how Bard's MBA in Sustainability is challenging conventional thinking by downloading "The MBA of the Future: What to Look for in a Cutting Edge Business School".

How Does Food Waste Affect the Environment? 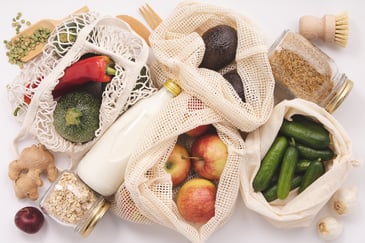