A resource for aspiring
leaders in sustainability.

Each day was equal parts educational and inspiring, but our visit to La Mesita in San Pablo Etla stood out to me in a particular way. La Mesita, an eco-tourism project, and environmental education center that overlooks the community of San Pablo Etla is cared for by a small staff of maybe four. The restored hillside is abundant with shrubs and agave, giving way to several structures and statues that emphasize a promise to protect the land. While La Mesita offers breathtaking views and is symbolic of a community’s commitment to conservation, the two impressive women that addressed us that day deserve special recognition.

Seeing the Landscape and Butterflies with Minerva’s Guidance

Our tour was guided by Minerva, a woman primarily responsible for the successful restoration of the biodiversity at La Mesita. Minerva doesn’t have an official title, but her extensive knowledge is equivalent to that of a trained ecologist.

As we began up the trail, Minerva told us that 12 years ago, the region looked entirely different, degraded and void of the abundant vegetation currently covering the area now. She led us to the first nursery where native and medicinal plants are grown and cared for until they are ready to be transplanted in the area. Minerva recalled that, when the project was in its infancy, there remained only one juniper. Turning to the rows of saplings, she told us there are now over 7,000 junipers in the region. While answering questions about the relocating process she smiled and sighed “I wish I had more time,” expressing how difficult it is to replant everything in the nursery.

We cut across the path to the neighboring nursery that Minerva also runs. The community butterfly nursery at La Mesita currently houses 5 different species.  Butterflies are considered one of the most important pollinator species, second to bees, and they serve as good climate and bioindicators. I wrote the equation in my notes “butterflies + more butterflies = a well-conserved forest.” With that said,  Minerva has been tirelessly working on rehabilitating the butterfly population in San Pablo Etla, attending as many classes she can find the time for. As she held up a stick with an attached cocoon, the result of careful propagation, her eyes gleam, telling us of the 400 monarchs she released last year. I couldn’t help but be in complete awe of Minerva’s devotion to the restoration efforts at La Mesita, amazed by all the energy she pours into her work.

Already enamored by Minerva’s dedication, we redirected our attention to Alfonsina Arriaga-Jiménez, a Research Scientist focused on the biogeography and ecology of dung beetles in altitudinal gradients. Alfonsina has accompanied Bard students during their trip to Oaxaca for the past 3 years and significantly contributes to the experience with both her lively presence and rich knowledge of montane ecosystems. 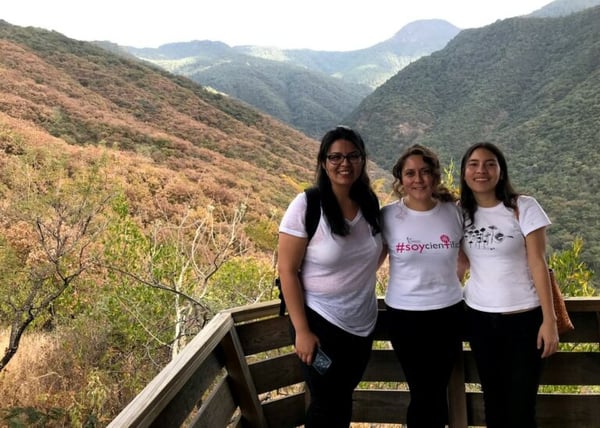 She explained her research and the paper she recently published on the new species her and her team discovered at La Mesita during the wet season of 2017. She discussed the vital role of dung beetles as key decomposers, critical for a healthy ecosystem.

As she held up a shadowbox of different species of dung beetles found in the region, I became fixed on the writing on her shirt, “Soy cientifica” with the female symbol cleverly replacing the “t.” The shirt is a statement, “I am a woman scientist,” articulating the necessary and unavoidable inclusion of women and girls in science and technology fields. She probably got the shirt from the Institute of Ecology in Veracruz, where she completed her Post Doc. The school held a meeting, using the framework of International Day of Women and Girls in Science (February 11th), to promote stories of outstanding women in research and encourage young girls to pursue careers in science.

I thought about the two women, both with years of experience and driven by sheer passion. I wondered what obstacles they might have encountered before being viewed as experts. Luckily, I had the opportunity to sit down with Alfonsina later in the week and asked that very question.

She told me it was difficult returning to Mexico for her fieldwork after receiving her Ph.D. in France, trying to get people to see her as a researcher and not just a girl. She said when she traveled to communities with her male assistant, people would direct all their questions towards him, regardless of how much authority Alfonsina displayed.  Being a young and single woman, Alfonsina had to work twice as hard to prove her position as the lead researcher, even her most significant achievements were questioned.

Our conversation circled back to Minerva, both of us admiring her commitment to the ongoing project at La Mesita. I regretted not taking the time to ask Minerva her experience as a woman in her role. I thought about her enthusiasm on the topic of junipers and butterflies and imagined her response to be similar to Alfonsina’s, “it’s complicated, but if you love something, you make it work.”

Interested in starting your own journey into environmental conservation and sustainable development? Here at Bard, all our students are exposed to the finest science, policy, law, and practical knowledge that's needed to change the world. Reach out to our admissions team for more information about our programs!

A Resource for Aspiring Leaders in Sustainability

The Bard CEP and MBA fully integrates sustainability into a core curriculum.